5. You are always a beauty in your lover’s eyes

10. Listen to Both Sides and be Enlightened, Listen to One Side and be in the Dark

金繕い is kintsukuroi or kinzukuroi, the Japanese art of repairing pottery with a lacquer mixed with gold, silver, etc.

I added this because many people searched for this title. Not sure how appropriate this is for a calligraphy wall scroll.

大師範 is a Japanese title for master, grandmaster, or senior instructor.

大師範 is a bit of an odd selection for a piece of calligraphy artwork, so proceed with caution. Better to find an appropriate phrase or title (such as the name of the martial art), and then add something like "Grandmaster Smith" as a smaller inscription down the side.

平 is a single-character that means balance in Chinese but it's not too direct or too specific about what kind of balance.

平 is also part of a word that means peace in Chinese, Japanese and old Korean.

Some alternate translations of this single character include: balanced, peaceful, calm, equal, even, level, smooth or flat.

Note that in Japanese, this just means "level" or "flat" by itself (not the best choice for balance if your audience is Japanese).

This the last sentence of Joshua 24:15 in Chinese.

I think it is a bit like having a secret code on your wall that quietly expresses to whom you are faithful.

Note: If you are curious, the last three characters represent they way "LORD" is used in most English Bibles. In Chinese, this is actually the phonetic name in Mandarin Chinese for "Jehovah". 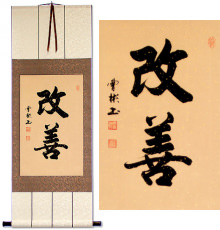 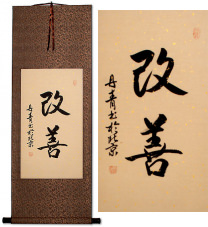