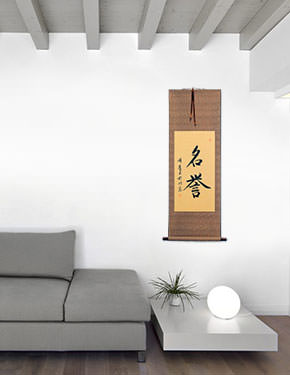 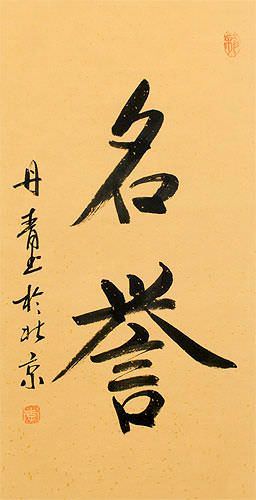 This version of honor is about having or earning the respect of others and about your reputation. It is the status of being worthy of honor (not to be confused with doing honorable things or specific actions).

See our Honor web page for more honor-related terms in Chinese and Japanese that you can order custom.

This is also one of the tenets of the Samurai. You may want to have a look at our Bushido - Code of the Samurai - Way of the Warrior web page.

Both modern Japanese and modern mainland Chinese use the same simplified version of the second character of honor. There is also a more complex, traditional version of the second character, seen in Japan before WWII and in China before 1949. The version on this scroll has always been a shorthand way to write this word (for at least 1500 years). Just don't be worried if you see the other version somewhere - they are both correct.