• Delivered to you in Ashburn by Jan 28th.
• Standard shipping is just $3.80 for any order.
• Hand-Painted Calligraphy - Each one is unique.
• Handmade Wall Scroll.
• Money-Back Guarantee. 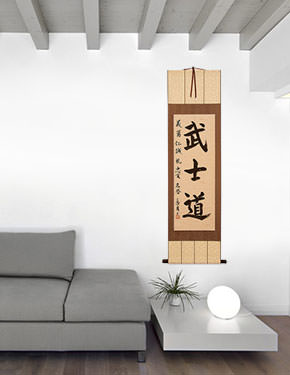 This is a special edition. I picked one of my favorite combinations of natural grass-fiber paper, ivory silk panels with accent lines, and a copper inner silk frame. This is a gorgeous wall scroll. However, if you want one in a different style, we build them custom!
See our Bushido Way of the Samurai page for more custom Japanese calligraphy options related to Bushido concepts.