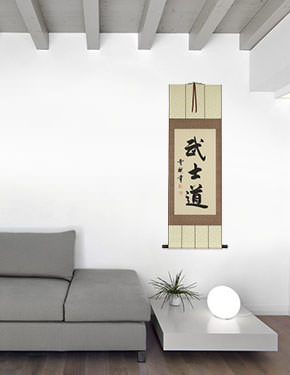 This one is hand-painted on natural handmade paper (you will see some husks and fibers from the natural elements of the paper). It was then mounted as a handmade scroll with ivory and copper silk (my signature style).

The actual code was passed on verbally to each generation of samurai, but over time, seven chief virtues emerged and became the written form of Bushido.

Of course, credit is generally given that a Chinese man (known in the west as "Confucius") is the father of these values in China. Therefore, you'll find these concepts belong not only to the Japanese samurai but have spread throughout Asia. Variations of these soldierly and moral values can be seen in China, Korea, Vietnam, and elsewhere.