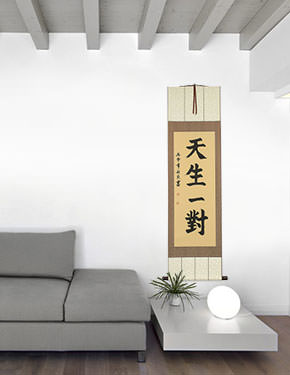 If you're in a happy relationship or marriage and think you have found your soul mate, this would be a wonderful wall scroll to hang in your home. Written by Master Calligrapher Xing An-Ping in a bold "Kaishu" style using Chinese ink on handmade tan xuan paper with gold flakes. The artwork was then mounted to a handmade silk brocade wall scroll at our workshop in Beijing.