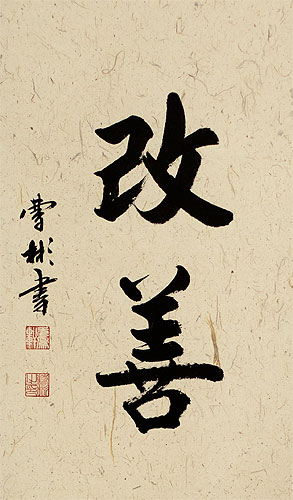 The concept of Kaizen became very important in post-war Japan when Edwards Deming came to Japan to teach concepts of incremental and continuous improvement (for which the big 3 auto-makers did not want to hear about at the time - even kicking Deming out of their offices). The Japanese workforce absorbed this concept at a time with their culture was in flux and primed for change.

This kaizen term is closely associated with the western title "Total Quality Management". Perhaps dear to my heart since I spent years studying this at university before I moved to China where TQM did not seem to exist. Slowly, this concept has entered China as well (I've actually given lectures on the subject in Beijing).

If you are trying to improve processes at your business or need to remind yourself of your continuous TQM goals, this would be a great wall scroll to hang behind your desk, or in your workplace.