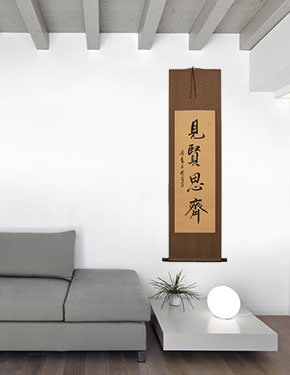 This comes from the Analects of Confucius. This can also be translated as:
If you see a worthy person, think to imitate.
Emulate the virtuous.
Follow the example of a virtuous and wise teacher.
When you meet a wise person, you should learn from them and be inspired to become as wise as they are.

見賢思齊 is a pretty long proverb in English but in Chinese, it's only four characters.
However, in Chinese, the deeper meaning often surpass the dictionary definition of each character.

In this case, you should seek wise people to learn from throughout your life...
Always try to learn enough to become equal to them. It also suggests that the process of learning and seeking wisdom is a non-ending cycle.