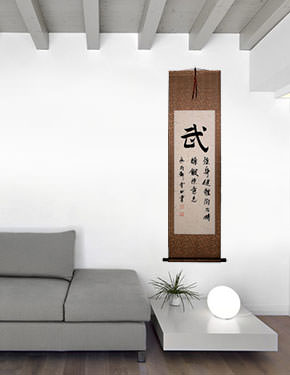 This particular calligraphy is done in Xing-Kaishu (Running-Regular Script). This style features bold strokes in a flowing character form.

The main Chinese character at the top is "wu" (it's "bu" in Japanese, with the same meaning) which means warrior spirit or military, and it closely identified with Kung Fu (Gong Fu).

Below this martial character is an inscription that reads, "强身健体 陶冶情操 锻炼意志". This means, "Strengthen your body, relax your mind, train your spirit".
The remainder of the small characters say, "曹彬书于北京" which basically says, "Cao Bin's calligraphy, written in Beijing".