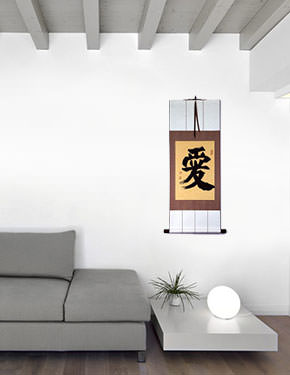 The Love Character in Chinese & Japanese

Written with Chinese ink on handmade tan paper with gold flakes, and mounted to a handmade ivory-colored silk brocade wall scroll with a copper-colored inner frame of silk brocade. 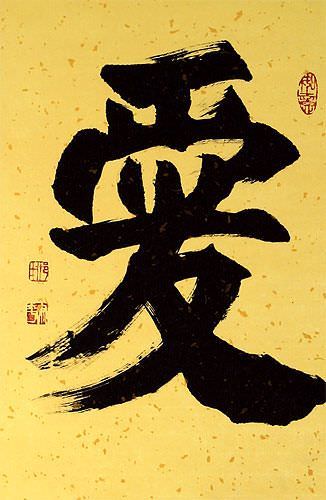 Traditional Chinese Characters often referred to as Hanzi in Chinese, and Kanji in Japanese.

Japanese Kanji and Chinese Hanzi are often visually the same, and hold the same meaning.
However, some definitions have changed over the centuries, so the same character may not necessarily have the same meaning in both Chinese and Japanese.

For example, the sign on the front of a bath house in Japan, might lead a Chinese person to believe that he could get a hot bowl of soup inside.
Imagine the surprise when he finds "huge bowls of human soup" (people soaking in the hot tub) waiting for him as he walks in.

So "love" carries the same meaning in both cultures, it's just used more often in China.

To create this art, Xing An-Ping used special Chinese ink on tan xuan paper (rice paper). The raw calligraphy was then taken to our mounting shop in Beijing where some of the best mounters in China laminated this to more sheets of xuan paper and mounted it as a beautiful silk brocade wall scroll.