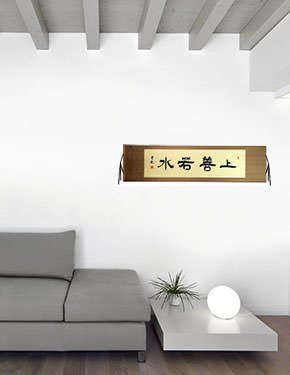 This quote is sometimes presented as, "Be like water".

However, this is an ancient quote from the great philosopher Lao Tzu. It basically suggests that the ultimate goodness and purity (in the world) is water. Many take this as a suggestion to be like pure/good water.

Not that this is written in the traditional right-to-left format (opposite of English). This horizontal wall scroll will take a careful placement of some nails or hooks in your wall. They must be the right distance apart and perfectly level so the scroll does not droop and hangs straight.