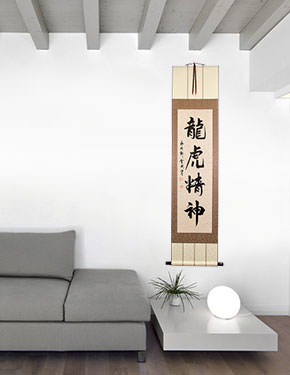 This tiger artwork will look great in your home or office.

This means the spirit of the dragon and tiger. It speaks to the vitality and vigor that is the nature of these two creatures.

Beyond "spirit", the second two characters can also mean mind, soul, or heart. Therefore, you can also say this means "Heart of the Dragon and Tiger", etc.

This is often titled as "Ryukoseishin" in many Japanese martial arts.

In Chinese, this is pronounced "lóng hǔ jīng shén". In Japanese, it's "ryu ko sei shin".