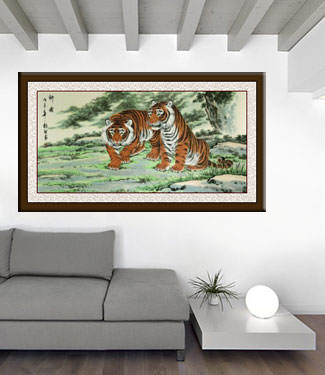 The Chinese title written on this scroll is "Shen Wei". Separately, these characters mean "vitality/energy" and "impressive/powerful". But together they they could be expressed as, "Invincible Might". Certainly this is a fitting title for one of the most powerful and mighty creatures of the animal kingdom.

The Chinese characters written on this painting include the title noted above, the year painted (2008) and the artist's signature "Yi-Qiu" (the artist's given name) and another character that means "painted by" which follows his signature.