• Delivered to you in Ashburn by Dec 7th.
• Standard shipping is just $3.80 for any order.
• Artist has passed away. There will be no more like this.
• Hand-Painted Artwork.
• Handmade Wall Scroll.
• Money-Back Guarantee. 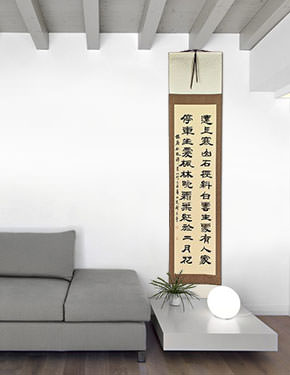 This piece is painted with special Chinese ink on xuan paper (rice paper) mounted to a traditional two-toned silk wall scroll (made by hand in our own workshop).

This calligraphy was done by Master Calligrapher Xing An-Ping of Beijing. This particular scroll is offered at a special low price. The low price has to do with the fact that we had the calligrapher do a series of these, because it is a very popular title. If ordered as a custom piece from this Master Calligrapher, it would be $20 more.