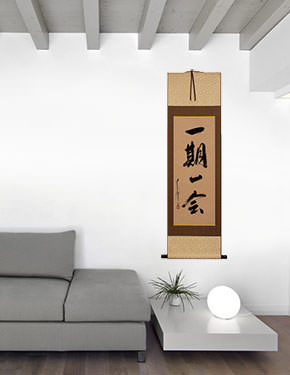 This Japanese title can be translated as "for this time only", "chance meeting", "one meeting, one opportunity", "never again", or "one chance in a lifetime". There is a suggestion that because it's a fleeting chance, one should cherish it as such.

The characters literally mean "one time one meeting" - of course, the Kanji characters have meaning far beyond a direct translation like this.

Some might use this proverb to talk of an opportunity that presents itself just once in your life. It could also be the single chance-meeting with your true soul mate. Basically an expression for any event that might happen once in a lifetime.