Enter your email below, and get an automatic notice when results for Drop are added or updated...

Personalize your custom “Drop” project by clicking the button next to your favorite “Drop” title below...

My Australian friends always say "No worries mate". It's caught on with me, though I drop the "mate" part since it confuses my fellow Americans.

If you would like to express the idea of "no worries" this is the best and most natural way to say it in Chinese.

The characters you see to the left can be translated as "put your mind at rest" or "to be at ease". You could literally translate "no worries" but it doesn't "flow" like this simple Chinese version.

Note that in Japanese and Korean, this holds the similar meaning of "peace of mind" but can also mean absentmindedness or carelessness depending on context. 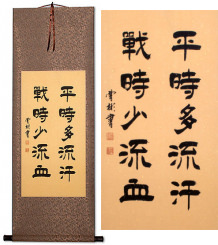 
Check dictionary for drop
Warning: mysqli_num_rows() expects parameter 1 to be mysqli_result, bool given in /home/admin/web/orientaloutpost.com/public_html/includes/extradict.php on line 49

5 people have searched for Drop in Chinese or Japanese in the past year.
Drop was last searched for by someone else on Feb 20th, 2017