Enter your email below, and get an automatic notice when results for Essence of Life are added or updated...

Essence of Life in Chinese / Japanese...

生命力 can mean "vitality" or "libido".

The first two characters mean "life" or "life force". The last character is a common word that means "strength". So together you get the meaning "life strength" which is the essence of vitality.

Some will also translate this word as "good health".

The rules of life, the universe, and everything.
lǐ
kotowari
이*리

At essence, this word means science. But it's a very ambiguous and open term. 理 speaks to the reason that all things exist, and how things work from the microscopic to the cosmic level.

If you are a scientist, or just searching for, "the answer to life, the universe, and everything", this could be the character for you.

Depending on context, this can also mean, "mind and spirit", "life energy", or "essence".

This term is often used in Buddhism with the same meaning.

Note: In modern Japanese, they have simplified the last Kanji to look like the version shown to the right. If you want this modern version, please click on this Kanji. Otherwise, if you click the button above, you’ll get the ancient or traditional version (which is also universal between Chinese, old Korean, and old Japanese).

簡 expresses the idea of something simple, or the essence of simplicity in life in Chinese.

This can also refer to a simple slip of bamboo for taking notes or writing a letter (especially in Korean Hanja).

Technically this is a word meaning simple and brevity in Japanese but it's rarely used in modern Japanese. Therefore, you should probably only select this character if your audience is Chinese.

This title suggests having the power to recover, restore, rehabilitate. This can refer to yourself, someone else, or even to something, like rehabilitating a burned forest. 恢復力 is the essence of resilience in life.

The first two characters are a word that means to reinstate, to resume, to restore, to recover, to regain, to rehabilitate, restoration, rehabilitation, recovery, return, improvement, recovery (from an illness), recuperation, or convalescence.

The first Kanji alone means to wash, to bathe, primness, cleanse or purify.

Together, these two Kanji create a word that is defined as "purified spirit" or "enlightened attitude" within the context of Japanese martial arts.

洗心 is one of the five spirits of the warrior (budo), and is often used as a Japanese martial arts tenet. Under that context it's often defined this way: A spirit that protects and harmonizes the universe. Senshin is a spirit of compassion that embraces and serves all humanity and whose function is to reconcile discord in the world. It holds all life to be sacred. It is the Buddha mind.

洗心 does not show up as a word in too many Chinese dictionaries but it can be read and has the same meaning in Chinese. 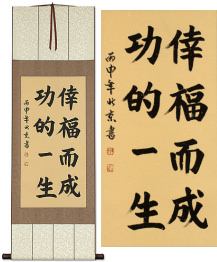 Lookup Essence of Life in my Japanese & Chinese Dictionary