Enter your email below, and get an automatic notice when results for Nothingness Empty Void are added or updated...

In the Buddhist context, it can mean "emptiness of the material world". This can also be used as an adjective to modify other words with a meaning of unreal or insubstantial.

In Buddhist context, this relates to the doctrine that all phenomena and the ego have no reality but are composed of a certain number of skandhas or elements, which disintegrate. The void, the sky, space. The universal, the absolute, complete abstraction without relativity. The doctrine further explains that all things are compounds, or unstable organisms, possessing no self-essence, i.e. are dependent, or caused, come into existence only to perish. The underlying reality, the principle of eternal relativity, or non-infinity, i.e. śūnya, permeates all phenomena making possible their evolution.

From Sanskrit and/or Pali, this is the translation to Chinese and Japanese of the title śūnya or śūnyatā.

In Japanese, when pronounced as "ron" (sounds like "roan") this can be a given name. It should be noted that this Kanji has about 5 different possible pronunciations in Japanese: kuu, kara, sora, ron, and uro. 空 is also an element in the Japanese version of the five elements.

無 is the simple way to express "nothing".

However, this single character leaves a bit of mystery as to what you might really mean if you hang it as a wall scroll. I'm not saying that's a bad thing; as you can decide what it means to you, and you won't be wrong if you stay within the general context.

More info: 無 is usually used as a suffix or prefix for Chinese and Japanese words (also old Korean). It can be compared to "un-" or "-less" in English. It can also mean "not to have", no, none, not, "to lack", or nothingness.

空無 is "nothingness" in a Buddhist context.

The first character means empty but can also mean air or sky (air and sky have no form).

The second character means have not, no, none, not or to lack.

Together these characters reinforce each other into a word that means "absolute nothingness".

I know this is a term used in Buddhism but I have not yet figured out the context in which it is used. I suppose it can be the fact that Buddhists believe that the world in a non-real illusion, or perhaps it's about visualizing yourself as "nothing" and therefore leaving behind your desire and worldliness.
Buddhist concepts and titles often have this element of ambiguity or rather "mystery". Therefore, such ideas can have different meanings to different people, and that's okay. If you don't get it right in this lifetime, as there will be plenty more lifetimes to master it (whatever "it" is, and if "it" really exists at all).

Soothill defines this as "Unreality, or immateriality, of things, which is defined as nothing existing of independent or self-contained nature". 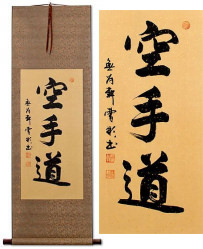