Enter your email below, and get an automatic notice when results for Flower are added or updated...

Personalize your custom “Flower” project by clicking the button next to your favorite “Flower” title below...

18. In Flowers the Cherry Blossom, In Men the Samurai

19. Rose Flowers Given, Frangrance Remains on Hands of Giver

花 is the simple way to write "flower" in Chinese, Japanese, and old Korean.

It can also mean blossoms or can refer to a fancy or assorted pattern.

Note: In some context, it can mean "spend money". However, as a single character, it will be read as "flower".

This has the meaning of Xochitl (flower) in Spanish, so if your name is Xochitl, I suggest this character to represent your name.

More random information about this character:
花 is the Korean surname spelled as "Hwa" before the Korean Romanization reformation of 2000-2001.
It's also a somewhat common given name in China (for females).
花 is a borrowed word from Chinese, so it sounds similar in Chinese and Korean.

花開 is also associated with Springtime, the beginning of something, or youth.

花開 is often followed by "flower falls" (closes and loses its petals) which means "Things come and go" or "Youth comes and goes".

If you like flowers and the Springtime, this is a great selection for you. However, if you want the companion "flower falls" (flower withers), we offer that as a companion wall scroll or all together as a four-character phrase.

木蘭花 is the Chinese word for Magnolia Flower.

(The flower of love)
méi guì

玫瑰 is the most common way to write rose (as in the flower) in Chinese.

丹花 is also the a Japanese personal name romanized as Tanga.

茉莉花 is the title for "Jasmine Flower" in Chinese.

This title is rarely used in Japanese for a specific species known as "Arabian jasmine" (Jasminum sambac).
Japanese will more commonly write ジャスミンの花 (jyasumin no hana).

薔薇 is the most universal way to write rose (as in the flower) because it is understood in both Chinese and Japanese (same characters in either language). 薔薇 is also a common way to write about roses in Asian poetry. This can be translated as "wild rose" if you are looking for that title.

薔薇 is also how to write "rose" in old Korean Hanja (though they now us Hangul and most Koreans of this generation will not be able to read this without a dictionary).

鳶尾花 is the title for the iris flower in Chinese and Japanese.

If your name happens to be Iris, this is a beautiful way to express your name by meaning in both of these languages (it will mean your name but not sound like your name).

Can also mean wall iris, roof iris, or Iris tectorum.
Note: There are other titles for specific iris varieties - contact us if you need something special.

菖蒲 is the title for the iris flower in Japanese.

If your name happens to be Iris, this is a nice way to express your name by meaning in Japanese (it will mean your name but not sound like your name).

Note: This will also be recognized in Chinese, though it is generally written with the addition of a character meaning "stone" in front of this title in Chinese.

This proverb literally translates as, "If one loves a flower, [one will] love it's pot; [if one really] loves [one's] daughter, [one will also] love [one's] son-in-law".

Figuratively, is similar to the English proverbs:
Love me, love my dog.
Love for a person extends even to the crows on his roof.

弗勞爾斯 is the transliteration to Mandarin Chinese for the family name Flowers.

This sounds like "Flowers" in Mandarin Chinese but does not mean flowers in any way, shape or form. I strongly suggest the single character which means "flower" in Chinese, Japanese Kanji, and old Korean Hanja.

This Chinese, Korean, and Japanese Buddhist title relays the idea of "heart-to-heart communication", or "thought transference".

The literal translation is, "holding a flower and subtly smiling", or "the holding of a flower with a subtle smile". It is the visual act and emotion that communicates more volumes than words can say.

It suggests nearing the end of something. A time that some might call "The sunset of life". 花落 often follows "flower open" to talk of the cycle of life.

We offer this as a possible companion to a "flower open" scroll (to be placed side by side, or at either side of a doorway to say "things come and go" - a cool metaphor for a doorway). If placed in a doorway, it could be used as a suggestion to your guests that things bloom when they arrive through your door but wither when they leave (a great compliment).

華 is really open to interpretation. 華 meant flowers or blooming in ancient China. It still has that meaning in Japanese, and Buddhist context.

In modern China, this means glorious, beautiful, splendid, magnificent, or the best part of something. It can also refer to the country of China or something Chinese (such as people - overseas Chinese are often called "hua ren"). 華 is also a surname in China.

In Japanese, this can be the female given name "Ririka". It's also the short name for a certain kind of playing cards in Japan.

In Korean, This can be the surname "Hwa". While it also means splendid, flowery, or the country of China in Korean.

These two characters literally mean opening flowers (a verb). 開花 is also associated with Springtime, the beginning of something, or youth.

If you like flowers and the Springtime, this is a great selection for you.

In Korean Hanja, this can be a metaphor for achieving enlightenment or becoming civilized (blooming civilization).

花開花落 is a complete proverb that lightly speaks of the cycle of life, or how things come and go in life.

花開花落 is used as a metaphor to suggest that youth is a temporary state, which in time will pass.

This can also be used to suggest that fortunes can come and go (everything is temporary).

Note: There are two versions of this proverb which are very similar. The other uses a word that means wither instead of fall.

花開花謝 is a complete proverb that lightly speaks of the cycle of life, or how things come and go in life.

花開花謝 is used as a metaphor to suggest that youth is a temporary state, which in time will pass.

This can also be used to suggest that fortunes can come and go (everything is temporary).

Note: There are two versions of this proverb which are very similar. The other uses a word that means fall instead of wither.

This Japanese proverb is about the cycle of life, or how things come and go in life.

This can be used to suggest that youth, fortune, and life can come and go (everything is temporary).

Rose Flowers Given, Frangrance Remains on Hands of Giver

This proverb has been translated several ways:

1. Roses given, fragrance in hand.

2. You present others roses, fragrance remains.

3. The fragrance of the rose always remains on the hand of those that bestow them.

4. A little bit of fragrance always clings to the hands which give the flowers

However, this literally translates as, "Give someone rose flowers, [your] hands keep [the] remaining fragrance".

This is sometimes translated as the "Devotion to the Law of the Lotus Flower Scripture".

蓮 is another name for "lotus".

This happens to be a single-character that expresses "lotus" in Chinese, and the common name of "lotus" in Japanese and Korean (note that there are two ways to pronounce this character in Korean).

荷花 is one of two ways to write/say "lotus" or "lily" in Chinese.

It will make a nice wall scroll if you are fond of lotus flowers, and/or lotuses have a special meaning to you. 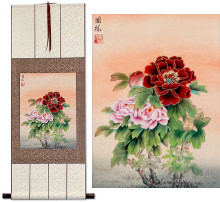 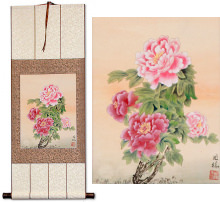 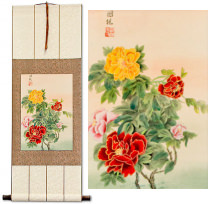 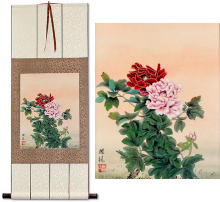 349 people have searched for Flower in Chinese or Japanese in the past year.
Flower was last searched for by someone else on Feb 27th, 2021