Did you mean: Jujutsu ?

Personalize your custom “Jujutsu” project by clicking the button next to your favorite “Jujutsu” title below...

This is the title for the Japanese martial arts style known as "Aiki-Jujutsu".

This is the Japanese martial arts title, Daitō-ryū Aiki-Jūjutsu.

If you want this title, you probably already know enough about the meaning.
If not, here's the Wikipedia entry: Daitō-ryū Aiki-Jūjutsu.

武士流柔術 is a special title added for a customer's specific school/style of Jujutsu.

Please only order this if you are a member/practitioner of this style.

合気術 (Aiki-Jutsu) is a school of martial arts descended from Daitō-ryū Aiki-jūjutsu.

八光流 (Hakkō-Ryū) is a style of jujutsu associated with Daito-Ryu.

The title Hakko-Ryu comes from the Japanese phrase which translates as "The Style of the Eighth Light", or more literally "Eighth Light Style".

The 光 character is associated with brightness or brilliance. It can be a used to describe someone of great talent or potential. So the meaning goes far beyond just light. 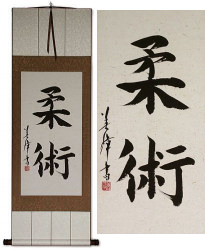