Did you mean: Get Well Son ?

Enter your email below, and get an automatic notice when results for Get Well Soon are added or updated...

Get Well Soon in Chinese / Japanese...

It can also mean, "take care of yourself", or "get well soon". It's not always associated with a religious meaning. 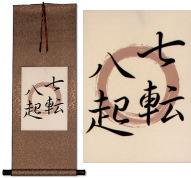 Not the results for get well soon that you were looking for?

Below are some entries from our dictionary that may match your get well soon search...

Lookup Get Well Soon in my Japanese & Chinese Dictionary