Enter your email below, and get an automatic notice when results for Faith Hope Charity are added or updated...

This is a list in Chinese and Japanese Kanji of an interpretation of the Seven Heavenly Virtues.

1. Faith is belief in God, and the right virtues.
2. Hope is taking a positive future view that good will prevail.
3. Charity is concern for, and active helping of, others.
4. Fortitude is never giving up.
5. Justice is being fair and equitable with others.
6. Prudence is care of and moderation with money.
7. Temperance is moderation of needed things and abstinence from things which are not needed.

The full list is here. This is a word list, not a common phrase. While all Chinese and Japanese people will recognize the words in the list, they may not understand what the list is about (unless they are familiar with the Seven Heavenly Virtues).

don’t get this as a tattoo or anything like that without first consulting a native translator in the target language. These are fine for a wall scroll but a long discussion is needed before you commit to this for a lifetime inking commitment. 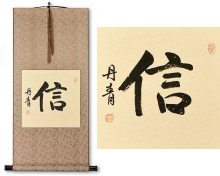