Enter your email below, and get an automatic notice when results for Woman are added or updated...

A common title ancient China, this actually refers to the scarf or head wrapping worn by virtually all women at that time.

巾幗 is kind of a cool way to say Woman now. The actual gender character alone on a wall scroll would actually just look like a fancy sign for the woman's restroom (WC).

If you are curious, the character to the right directly means female or woman. 巾幗 is useful information if you are a woman in need of a toilet in China.

女強人 is the best way to say "strong woman" or "strong and independent woman" in Chinese.

Grammar in China is a bit different, so these three characters literally read as "female strength person" or "woman strong person". This might sound funny in English but this is a natural-sounding title in Chinese.

烈婦 is a Japanese title for a strong-minded woman, virtuous woman, or heroine.

In some context, it can refer to a pure or chaste woman.

巾幗英雄 is a cool and somewhat ancient way to say woman hero in Chinese. 巾幗英雄 is used in modern times to refer to an outstanding woman or a woman with great accomplishments.

In the old days, it was a title for a woman warrior (oh, did I mention that there were great female generals who led huge armies into battle in ancient China?)

In Japanese, this is associated with a "geisha", which matches this definition of "mysterious woman". However, this is the colloquial way to say "professional geisha" or "expert prostitute" in Japanese. It, therefore, might not be what you want on your wall.

美麗的女人 is the best and most polite way to express "beautiful woman" in Chinese.

Note: Some people may like the simple 2-character 美女 way to express this but there are some bad connotations with that, so better to stay with this longer and more respectful title.

This can be read as "girl power", "woman power", or "female strength".

This should be "onna ryoku" in Japanese but I found some who suggest it should be "me riki".

美麗的姑娘 is the best way to express "beautiful girl" in Chinese.

媛 is used a bit more commonly in Chinese than Japanese.

金妮 is a transliteration to Mandarin Chinese for the name Jinni.

金妮 means, "golden girl", or "girl of gold" in Chinese.

金妮 is the special name I made up and chose for my third daughter. There is also another, more common way to transliterate this name which is 吉尼 instead of 金妮.

王女 is a Japanese title that means princess.

It's an unusual choice for calligraphy.

It refers to a child strongly attached to his/her father. 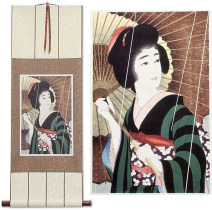 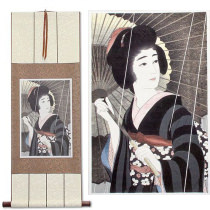 12 people have searched for Woman in Chinese or Japanese in the past year.
Woman was last searched for by someone else on Jan 1st, 2018