This wall scroll is discounted because of a couple of very minor spots in the painting. They're kind of ghost marks that you may not have noticed if I did not tell you about it. 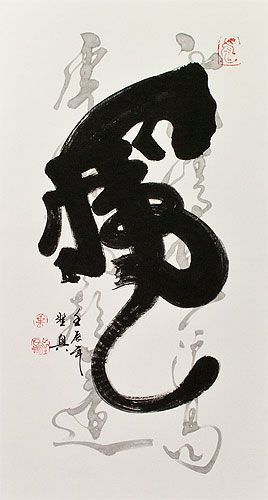 This is a unique form of calligraphy. It's a Chinese character that is made to look like an actual figure. In this case, a roaring tiger.

The large character is pronounced "hu" in Chinese. It's also the symbol for tiger in Japanese Kanji and old Korean Hanja. Though it might take a bit of imagination to actually "read" this tiger-shaped character.