禮貌 is a Chinese and old Korean word that means courtesy or politeness.

Courtesy is being polite and having good manners. When you speak and act courteously, you give others a feeling of being valued and respected. Greet people pleasantly. Bring courtesy home. Your family needs it most of all. Courtesy helps life to go smoothly.

If you put the words "fēi cháng bù" in front of this, it is like adding "very much not." it’s a great insult in China, as nobody wants to be called "extremely discourteous" or "very much impolite." 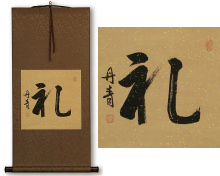 Not the results for courtesy politeness that you were looking for?

Below are some entries from our dictionary that may match your courtesy politeness search...