• Delivered to you in Ashburn by Sep 28th.
• Standard shipping is just $3.80 for any order.
• Hand-Painted Artwork - Each one is unique.
• Handmade Wall Scroll.
• Money-Back Guarantee. 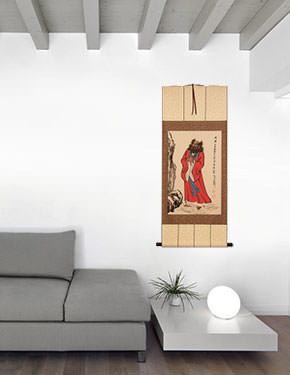 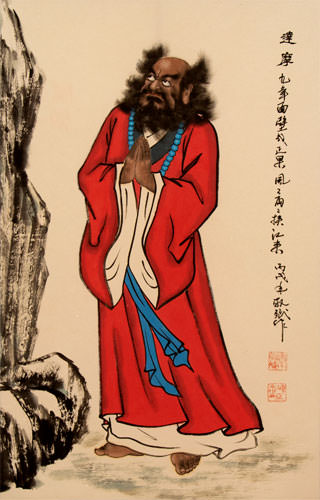 The title of this wall scroll refers to this one version of folklore regarding this key figure in Buddhism. The story goes that Da Mo stood, facing or staring at a wall for 9 years to seek an answer to life, the universe, and everything.

The Chinese title is "Da Mo Mian Bi" which is directly translated above. There is also a subtitle that goes on to explain the 9 years of facing the wall.

This happened during the northern kingdom of Wei, inside a cave by a Shaolin Monastery. Most accounts say that he stared at the wall without saying a single word for all of those years.
It's generally believed that Da Mo (or Dharma) directly went on to establish "Chan Buddhism" in China. When this form of Buddhism hit Japan, it became known as Zen Buddhism (Chan is the Chinese pronunciation of the same Kanji character known as Zen in Japan).

. This is sometimes Romanized as Da Mo, Damo, or the full name Putidamo or Putitamo.
His Name in Japanese is "Daruma" which is probably meant to sound like "Dharma" as in "Bodhi-Dharma".
In Korean he is Boridalma.
Vietnamese: Bồ-đề-đạt-ma.