通靈 is used to speak of something with supernatural essence, psychic power, or having magical power in Chinese.

超能力 is used in both Japanese and Chinese to refer to the ability to comprehend supernatural power.

Some may translate this as psychic ability, psychic power, ESP, or PSI.

This Chinese title refers to a person with psychic abilities, psychic powers, or ESP.

You may recognize the first character, 霊 (rei) is the same as the first Kanji in the word reiki. It means spirit or spiritual, but in this context can also mean phychic.
能力 can mean ability, capacity or power.

塔羅 is the title for the practice of using tarot cards in Chinese. 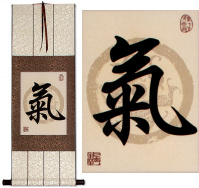