Did you mean: Defeat Ian Victory ?

Defeat in Victory in Chinese / Japanese...

No arrogance in victory, No despair in defeat.

This is a Chinese proverb suggesting you should have no arrogance when you experience a victory and not to despair in failure or defeat.

This is from Sun Tzu's (Sunzi's) Art of War. It means that if you know and understand the enemy, you also know yourself, and thus with this complete understanding, you cannot lose. 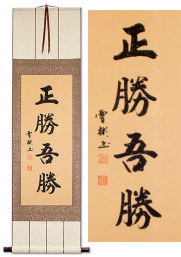 Lookup Defeat in Victory in my Japanese & Chinese Dictionary