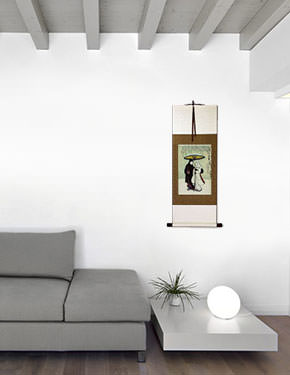 Young Lovers Walking Together under an Umbrella in a Snow Storm

Also known as "Lovers Under a Single Umbrella" or "The crow and the heron, couple walking in snow under an umbrella". 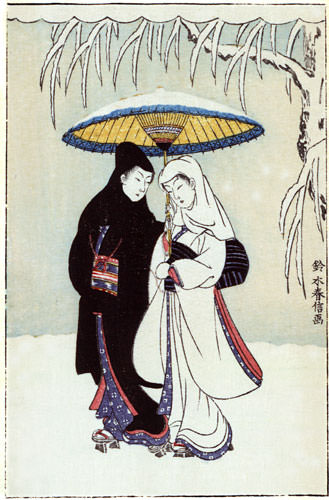 This Japanese woodblock print reproduction features a man and a woman standing in the snow beneath a snow-covered umbrella. The inscription reads, 鈴木春信画 which means Suzuki Harunobu's picture or print.

The title most often used for this print in Japan is 雪中相合傘.
To break that down:
雪中 means, "in the snow", or "in the midst of snow".
相合傘 means, "sharing an umbrella", or "under one umbrella".


Original artist: Suzuki Harunobu 鈴木春信 (1725–1770).
The original woodblock was carved/created in Japan around 1769. Some records indicate it could be as early as 1766 or 1767. There is some suggestion that a couple versions of the woodblocks for this print were created between 1767 and 1769 - this could explain the different time frames for the original print production.