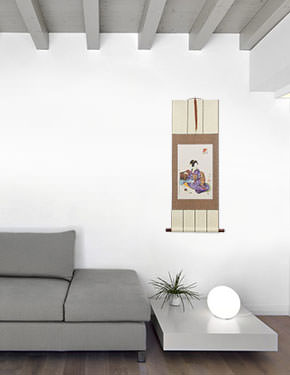 This Asian woman artwork will look great in your home or office. 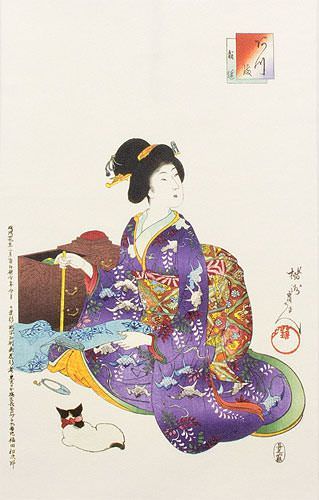 This Japanese woodblock print reproduction features a woman getting ready to do a bit of sewing on a light blue patterned piece of cloth. Her cat relaxes nearby on the floor with some of her tools.

He was not just an artist. He was also a retainer of the Sakakibara family of Takata domain in Echigo province. After the collapse of the Tokugawa Shogunate, he joined the Shōgitai and fought in the Battle of Ueno. Thereafter he fled to Hakodate, fought in the Battle of the Goryōkaku under the leadership of Enomoto Takeaki and Ōshima Keisuke, and achieved fame for his bravery.

Later, he became an artist/illustrator for the Kaishin Shinbun (newspaper) and also produced many nishiki-e prints. When he died, he had no disciple or apprentice. Upon his death in 1912, the Miyako Shinbun (Capital City Newspaper in Tokyo) reported that the fact he died without an artistic heir to carry on his tradition was, "most regrettable".