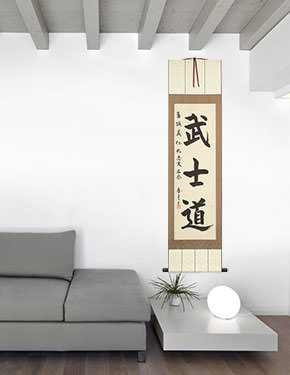 During the 9th and 12th centuries in Japan the warrior class was known as Samurai, also called bushi (knights/warriors - bushi hence bushido).
They emerged from the provinces of Japan to become the ruling class until their decline and later total abolition in 1876 during the Meiji Era.

These warriors were men who lived by Bushido; it was their way of life. The Samurai's loyalty to the emperor and his overlord or daimyo were unsurpassed. They were trustworthy and honest. They lived frugal lives with no interest in riches and material things, but rather in honor and pride. They were men of true valor. Samurai had no fear of death. They would enter any battle no matter the odds. To die in battle would only bring honor to one's family and one's lord.

The actual code was passed on verbally to each generation of Samurai, but over time, seven chief virtues emerged and became the written form of Bushido.

Of course, credit is generally given that a Chinese man (known in the west as "Confucius") is the father of these values in China. Therefore, you'll find these concepts belong not only to the Japanese Samurai but have spread throughout Asia. Variations of these soldierly and moral values can be seen in China, Korea, Vietnam, and elsewhere.