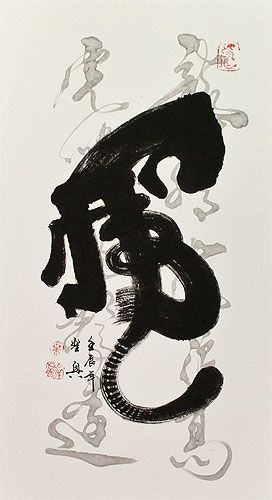 This is a very unique form of calligraphy. It's a Chinese character that is made to look like an actual figure. In this case, a roaring tiger.

The large character is pronounced "hu" in Chinese. It's also the symbol for tiger in Japanese Kanji and old Korean Hanja. Though it might take a bit of imagination to actually "read" this tiger-shaped character.

These are some of the variations of how the tiger character has been written in the past 3000 years:

The last one is a curive style, and you may see the curly stroke in the body of the tiger that matches this one.