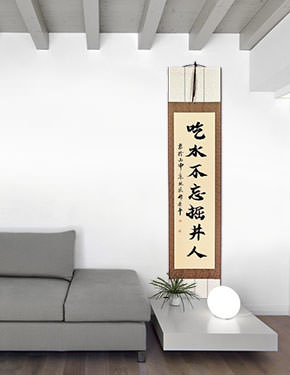 Drinking the Water of a Well, One Should Never Forget Who Dug It

A wall scroll to remind you to remember the work and sacrifice of your ancestors/elders.

In Korean, it's "흘수불망굴정인", but this is not a widely-known phrase in modern Korean.

This proverb suggests that one should always be grateful to those who helped you succeed. And remember your ancestors and those that came before you whose sacrifices made your present life better.

Some Chinese will separate the intended meaning from the idiom and translate this as "Don't forget the people who once helped you". In Modern China, this idiom is virtually never used to refer to an actual well.

You can order a custom version of this phrase here: Drinking the Water of a Well, One Should Never Forget Who Dug It.

This was written by Master Calligrapher Xing An-Ping in mid-April 2016 - just one year before his death. This was before he even knew he had Leukemia. I lost a great friend with his passing, and I hope you will value this artwork in the way it deserves. This is the last scroll of this title that he wrote during his lifetime - it cannot be replaced.

This artwork was made using Chinese ink on handmade high-fiber paper and mounted to a handmade silk brocade wall scroll.

The style of these characters is "Xing-Kaishu" or "Running-Regular Script".