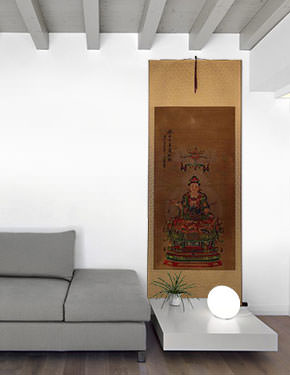 The deity depicted here is Guanyin, the Buddhist goddess of mercy. This is the deity you pray to for various things, including a male child and mercy in this and the next life, in regards to karma.
Note that I said "goddess" but actually, Buddhist deities are not supposed to have gender. However, Guanyin is often depicted with female characteristics.

Note: This deity is

which is officially romanized as Guanyin from Mandarin Chinese. You may also see "Guan Yin" used. The older romanization (still used in Taiwan) is Kuan Yin or KuanYin. In Japanese, they use the same characters (Kanji) but it's romanized as Kannon (it's the inspiration for the Canon camera company in Japan).

This wall scroll is designed to have a classic look (like an antique). The paper is tea-stained, and has various spots (light and dark) that enhance the antique look. I consider these spots to be part of the character of this artwork, and not a defect.

It should be noted that this is a "partial print". The black detailed lines were printed on the special handmade paper. We don't do a lot of partial prints like this, but many people kept requesting antique-styled wall scrolls. I finally picked some up on my last trip.

The use of the printing process for this artwork keeps the price of the artwork affordable (it would be more than 3 times more if this was 100% hand-painted). All of the colored portions are hand-painted. 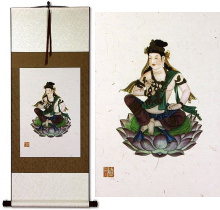 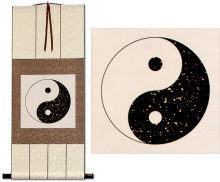 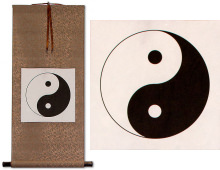 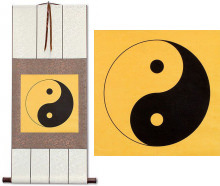