• Delivered to you in Ashburn by Feb 9th.
• Standard shipping is just $3.80 for any order.
• Hand-Painted Artwork - Each one is unique.
• Handmade Wall Scroll.
• Money-Back Guarantee. 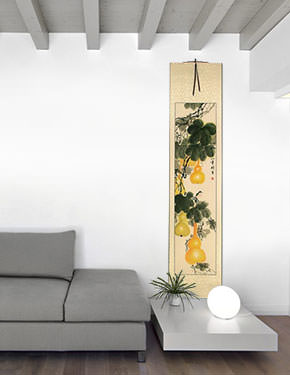 This artwork features bright yellow gourds hanging from a vine.

The title is 仙物 (Xiān wù) which literally means "Immortal Thing" but is a colloquial way to say, "Heavenly Fruit" or some will translate it as "fairy" in Chinese.

The inscription and signature read, "辛卯年 碩生" which translates roughly as, "8th-Heavenly-Stem [of the] 4th-Earthly-Branch Year (An indication this was painted in 2011), by Shou Sheng".