Three Beauties of the Present Day 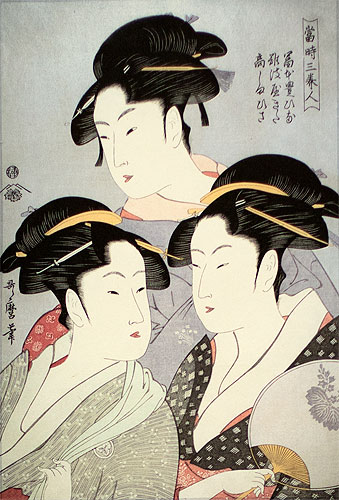 Naniwaya Okita and Takashima Ohisa are believed to have been 15 and 16 respectively at the time of the portrait. Both were daughters of successful tea house owners. Much of the success of those tea houses are attributed to the work of these girls to bring in and serve tea to customers. It may not be obvious, but both girls are wearing the basic clothes of tea house girls - elegant, but not-too-fancy.
In contrast, at the top is the comparatively elder Tomimoto Toyohina, a famed geisha of the Tamamuraya house in the Yoshiwara pleasure district. Tomimoto is dressed in fancier geisha-style attire.

To the left, above Takashima Ohisa's hair, you will see a round censor stamp that says【極】or kiwame, meaning "approved". This was the stamp used by the state in Japan to authorize publication from 1790 until 1805.

To the left, below Takashima Ohisa's hair, you will find a signature with the pen name 歌麿筆 (Utamaro Hitsu). The artist's full name is 喜多川歌麿 (Kitagawa Utamaro). He was born in Japan in Edo (now known as Tokyo) around 1753. He only lived to the age of 53, dying in 1806.