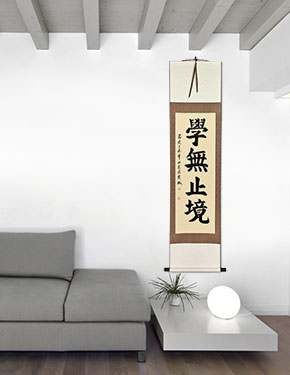 This calligraphy scroll tells of how we continue to learn throughout our lives. It can be translated in a few ways such as, "Study Has No End", or "Knowledge is Infinite"

If you click on the "Add to Cart" button, you will get the exact wall scroll pictured here, created by master calligrapher Xing An-Ping. This scroll was made as a sample to show various styles available from the master calligrapher. This is bargain=priced at $20 less than you would pay for it if you wanted it custom made.

All of our Chinese calligraphy scrolls are hand painted with special Chinese ink on rice paper and then the wall scroll is built by hand using rice paper, silk, wood etc.

Chinese calligraphy is only practiced by those with a keen and agile hand. It is an art that dates back thousands of years, and great artists, writers, and poets are often admired for their calligraphy ability and style.