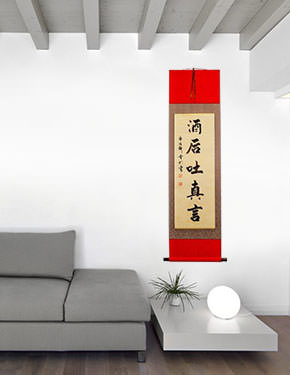 In Wine there is Truth

This is a nice Asian proverb if you know a vintner or wine seller - or wine lover - although the actual meaning might not be exactly what you think or hope.

The literal meaning is that someone drinking wine is more likely to let the truth slip out. It can also be translated as, "People speak their true feelings after drinking alcohol". This matches the Latin proverb, "In vino veritas".

It's long-believed in many parts of Asia that one can not consciously hold up a facade of lies when getting drunk, and therefore the truth will come out with a few drinks.

I've had the experience where a Korean man would not trust me until I got drunk with him (I was trying to gain access to the black market in North Korea which is tough to do as an untrusted outsider) - so I think this idea is still well-practiced in many Asian countries.