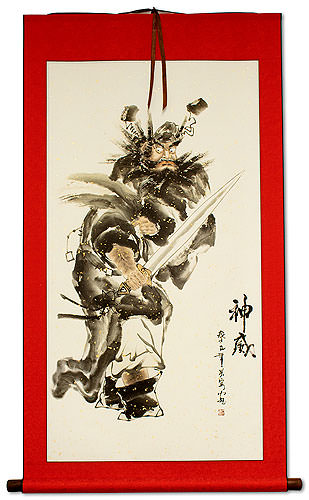 • Delivered to you in Ashburn by Feb 9th.
• Standard shipping is just $3.80 for any order.
• Hand-Painted Artwork.
• Handmade Wall Scroll.
• Money-Back Guarantee. 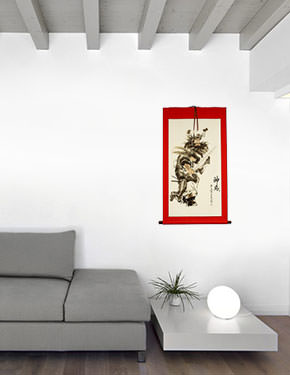 This was a custom print scroll that I created for a customer, but I used the wrong paper by mistake. So I have this extra one. It's very custom with a short top and bottom panel with bright red silk brocade. Just the print alone should be $58 plus about $50 for the scroll. I am pricing this below my cost, so you get a bargain!

According to the myth, Zhong Kui traveled with his close friend, Du Ping to take imperial examinations at the capital. Zhong Kui achieved top honors in the exams, but was stopped from taking the title earned after the emperor saw how truly ugly Zhong Kui was. In protest, Zhong Kui committed suicide upon the palace steps by crushing his own skull against the palace gate.

Later, during the reign of Emperor Xuanzong, (the sixth emperor of the Tang Dynasty 712 to 756 AD), the Emperor fell ill. He had a dream in which he saw an evil ghost. The ghost was stealing from the emperor (symbolically stealing his soul). A powerful ghost suddenly appeared and smote the evil ghost, then introduced himself as Zhong Kui. He said that he had sworn to rid the empire of evil.

From this episode in Chinese mythology/history, Zhong Kui became a famous figure of protection from evil.