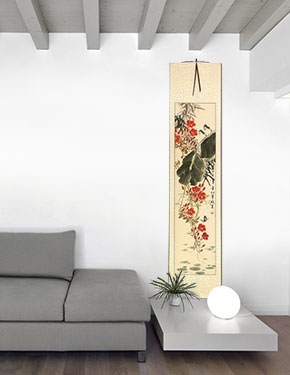 Soar Into the Sky

This artwork features two birds and a butterfly among palm leaves, morning glory flowers, and bamboo.

The title is 直上雲霄 (Zhí shàng yún xiāo) which literally means "Straight up [to the] clouds and heavens" but is a colloquial way to say, "Soar up into the sky" in Chinese. This is a sign of true accomplishment and success. The title does not directly relate to the artwork, just a nice title, but may refer to the birds' flight.