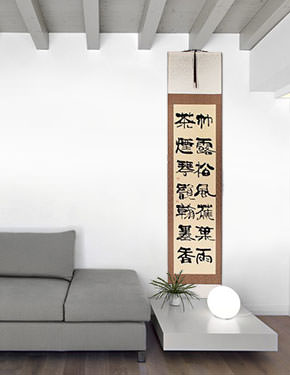 This is a kind of complex 12-character article or passage. It's about the perfect scene or place of serenity. This is difficult to translate into English while maintaining the poetic feel of the passage. But here goes nothing: Bamboo dew, Pine wind, rain drips from a banana leaf. Tea and incense, beautiful sound of the zither, brush and fragrant smell of ink.

The zither that I refer to is actually a "qin" which is a horizontal Chinese harp or zither. The brush and fragrant ink indicate the mood is perfect to write calligraphy. And, if you have ever smelled real Chinese calligraphy ink, it has a certain unique allure.

The style of these characters is "Lishu" (official script).