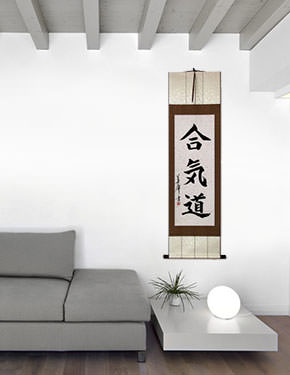 Note: It is somewhat accepted that Aikido is the origin of Hapkido in Korea. And other than a modern simplification to the middle Kanji of this 3-Kanji word, it is written the same in Korean Hanja.

This was created by Japanese master calligrapher Bishou Imai of Nara, Japan. The materials used include special calligraphy paper and ink. The artwork was sent to our workshop in Beijing where we created a hand-built silk brocade wall scroll. By building the wall scroll at our own workshop, we save you a lot of money - most authentic Japanese calligraphy wall scrolls cost over $230!