The Name S in Chinese/Japanese on a Personalized Wall Scroll.

Click the "Customize" button next to your name below to start your personalized S calligraphy artwork...

Look up S in my Japanese Kanji & Chinese Character Dictionary

If you want a special phrase, word, title, name, or proverb, feel free to contact me, and I will translate your custom calligraphy idea for you.

6. Even a fool may sometimes come up with a good idea

9. Five Codes of Tang Soo Do 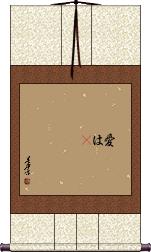 愛は寛容であり愛は親切ですまた人をねたみません愛は自慢せず高慢になりません礼儀に反することをせず自分の利益を求めず怒らず人のした悪を思わず不正を喜ばずに真理を喜びますすべてをがまんしすべてを信じすべてを期待しすべてを耐え忍びます愛は決して絶えることがありません is 1st Corinthians 13:4-8 (just the first sentence of verse 8) in Japanese.

In the familiar NIV, this would read:
Love is patient, love is kind. It does not envy, it does not boast, it is not proud.
It does not dishonor others, it is not self-seeking, it is not easily angered, it keeps no record of wrongs.
Love does not delight in evil but rejoices with the truth.
It always protects, always trusts, always hopes, always perseveres.
Love never fails...

The Japanese text is from the 新改訳聖書 (Shinkaiyaku) or New Japanese Bible. Popular among most Protestant denominations in modern Japan.

一日千秋 is a Japanese and Chinese proverb about missing someone.

一日千秋 is often used to express how hard it is to wait for someone's return, or to be away from someone.

Some will translate this as, "one day feels like a very long time", or "waiting for someone (something) is hard".

You might see this romanized as a single word, Ichijitsusenshuu, or as "Ichijitsu Senshuu" from Japanese.
If you break down the characters one-by-one, we get:
一 = one / a
日 = day / sun (can also represent time, or a date)
千 = 1000 / a thousand
秋 = autumn / fall

Together, 千秋 can mean, "autumn comes thousand times" (or 1000 years). It can also be read as 1000 periods of time.
However you literally read this, it relays the idea of heartache as you wait for someone that you miss.

正見 is one of the Noble Eightfold Paths of Buddhism. Right View, along with Right Thought constitutes the path to Wisdom.

To get to the right view of the world, you must first understand and follow Four Noble Truths.

Note: This term is exclusively used by devout Buddhists. It is not a common term, and is remains an unknown concept to most Japanese and Chinese people.

十法 is the title of the ten perfect or perfecting Mahāyāna rules.

The order of rules are as follows:
1. right belief.
2. right conduct.
3. right spirit.
4. joy of the bodhi mind.
5. joy in the dharma.
6. joy in meditation.
7. pursuing the correct dharma.
8. obedience to, or accordance with dharma.
9. departing from pride, desire, etc.
10. comprehending the inner teaching of Buddha and taking no pleasure attaining such knowledge or noting the ignorance of others.

This title is only used in the context of Buddhism. Japanese and Chinese people who are not familiar with Buddhism will not recognize this title.

Even a fool may sometimes come up with a good idea

This proverb is a humble way to speak of your success, ideas, or accomplishments. As if you are a fool who just got lucky in inventing or creating something.

Translations for this proverb include:
Even without any notable ability on my part, I may still get it right sometimes by good luck.
Even a fool may sometimes come up with a good idea.

十七 is the Chinese, Japanese, and Korean for the number seventeen (17).

正思唯 is one of the Noble Eightfold Paths of Buddhism. Right Thought, along with Right View constitute the path to Wisdom.

In Buddhism, Right Thought in simple terms means to free yourself from having ill-will towards anyone or anything. It also suggests that you remain harmless to other living creatures.

This can also be defined as, "Resolve in favor of renunciation, good will, and non-harming of sentient beings".

Note: This term is exclusively used by devout Buddhists. It is not a common term, and is remains an unknown concept to most Japanese and Chinese people.

紅五蝠 is a play on words in Chinese because of some homophones.

The first thing you need to know is that the word for bat, 蝠, sounds exactly like the word for good fortune, 福. Thus, bats are often associated with good luck and good fortune in Chinese culture.