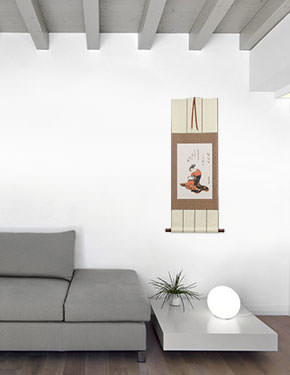 The Courtesan Kasugano Writing a Letter

From the book: Seirō Bijin Awase 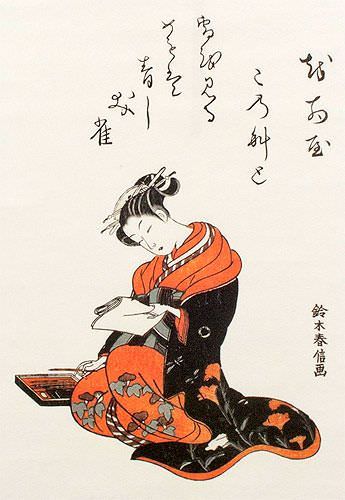 This Japanese woodblock print reproduction features a woman named Kasugano with her calligraphy supplies in hand, preparing to write a letter. The inscription at the right reads, 鈴木春信画 which means Suzuki Harunobu's picture or print.

This image was also featured in and became famous from a book published in 1770 titled 青楼美人合 (Seirō Bijin Awase).
To break that down:
青楼 means, "pleasure quarters" although, during the Edo period, this referred to an officially sanctioned brothel. In both Chinese and Japanese, this term is romanticized and is a rather high-level literary term for such a place.
美人 means, "beautiful woman" or "a beauty".
合 means, "together" or "collection".
You could say the book's title means, "Beauties of the Brothel Collection". There was no stigma attached to brothels, and in Japanese culture at the time, these women were revered and almost worshipped. Many courtesans or geisha were rich and influential. Times and perceptions have changed a bit.

Original artist: Suzuki Harunobu 鈴木春信 (1725–1770).
The original woodblock was carved/created in Japan around 1765.