This is a great wall scroll if you were born in the year of the monkey. 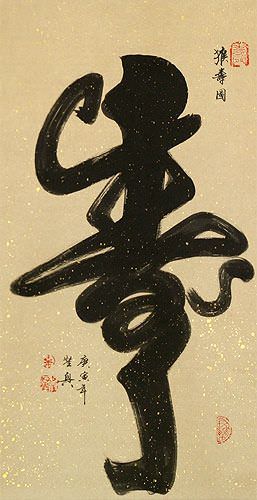 This is a very unique form of calligraphy. It's a Chinese character that is made to look like an actual figure. In this case, a frisky monkey. The monkey is probably meant to represent the Monkey King from the novel, "Journey to the West". This particular monkey was immortal.

The large character/monkey is also a representation of "shou" which means longevity and long life in Chinese, Japanese Kanji, and old Korean Hanja.