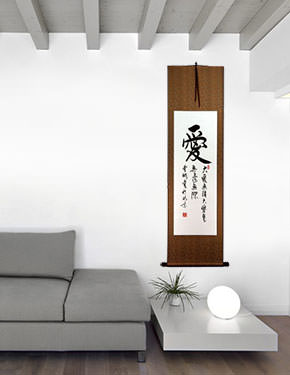 This wall scroll has a big "love" character at the top. Below is a poetic description of a great love. It reads, 大爱无疆 大爱是无边无际 or "Great love is boundless, great love has no limit".

The remainder of the small characters say, "曹彬书于北京" which means "Cao Bin's calligraphy written in Beijing".

Another Option... Click this link to customize and order special Asian Love Calligraphy Artwork:Custom Love Wall Scroll See the inscription tab to write your own English inscription below the love character and we'll translate it into Chinese for you.