• Delivered to you in Ashburn by Jan 21st.
• Standard shipping is just $3.80 for any order.
• Artist has passed away. There will be no more like this.
• Hand-Painted Artwork.
• Handmade Wall Scroll.
• Money-Back Guarantee. 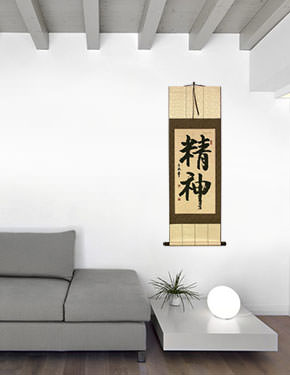 This is the kind of spirit that you have if you perform well in sports or competition. It is the idea of having a good attitude, and putting your all into something - so much so that others can see or feel your spirit. It is the essence of your being that can only be subjectively described because there are no words that can fully explain what "spirit" really is.

My Japanese dictionary further tries to explain this word by comparing it to mind, soul, heart or intention. My Chinese dictionary compares these characters to meanings like vigor, vitality, drive and mentality. My Korean dictionary defines this as mind, spirit and soul.

The smaller characters written on this wall scroll indicate that this was created by Xing An-Ping (his signature). The style is "xingshu" (running script).

To create this art, Xing An-Ping used special Chinese ink on xuan paper (rice paper). The raw calligraphy was then taken to our mounting shop in Beijing where some of the best mounters in China created this silk scroll.