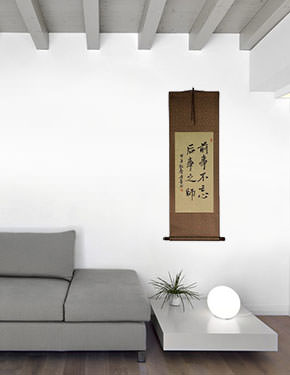 Past experience, if not forgotten, is a guide for the future.

If you want a custom wall scroll made to your specifications, click here: Past experience, if not forgotten, is a guide for the future. 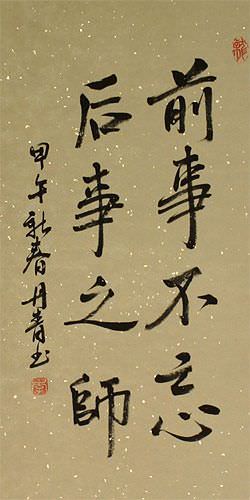 The most literal translation to English of this ancient Chinese proverb is:
"Past events not forgotten serve as teachers for later events".

The king of Zhao took advice from his minister Zhang Mengtan and secretly contacted the Han and Wei armies to reverse their plans and attack the army of Zhi Bo instead. The plan was successful, and the State of Zhao was not only saved, but was set to become a powerful kingdom in the region.

Zhang Mengtan immediately submitted his resignation to a confused king of Zhao. When asked why, Zhang Mengtan said, "I've done my duty to save my kingdom, but looking back at past experience, I know sovereign kings are never satisfied with the power or land at hand. They will join others and fight for more power and more land. I must learn from past experiences, as those experiences are the teachers of future events".
The king could not dispute the logic in that statement and accepted Zhang Mengtan's resignation.

For generations, the State of Zhao continued to fight for power and land until finally being defeated and decimated by the State of Qin (which lead to the birth of the Qin Dynasty in 221 B.C.).

Charm of the Mountain River and Wind
Landscape Painting