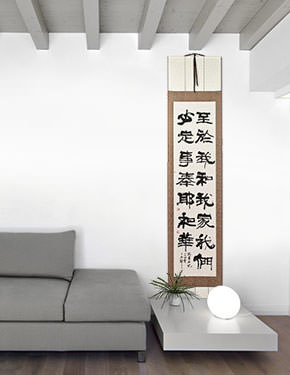 Joshua 24:15, "But as for me and my household, we will serve the LORD". Chinese Character Wall Scroll

Depending on which English translation you like, here are the full English language version of Joshua 25:14

Joshua 24:15 (KJV) And if it seem evil unto you to serve the LORD, choose you this day whom ye will serve; whether the gods which your fathers served that were on the other side of the flood, or the gods of the Amorites, in whose land ye dwell: but as for me and my house, we will serve the LORD.

Joshua 24:15 (NIV) But if serving the LORD seems undesirable to you, then choose for yourselves this day whom you will serve, whether the gods your forefathers served beyond the River, or the gods of the Amorites, in whose land you are living. But as for me and my household, we will serve the LORD.

This scroll just dwells on the last line of the verse, "...as for me and my household, we will serve the LORD".

I think it is a bit like having a secret code on your wall that quietly expresses to whom your are faithful.

This calligraphy was done my Master Calligrapher Xing An-Ping of Beijing. The calligraphy is done in his special signature style (his "personal lishu style"). This is the style that made him famous and has been featured in art magazines and books in China.

This particular scroll is offered at a special low price. The low price has to do with the fact that we had the calligrapher do a series of these, because it is a very popular title.

If you would like a different Bible verse created for you on custom wall scroll, please post your request here:
Bible Verse Requests for Custom Chinese Calligraphy Wall Scrolls