• Delivered to you in Ashburn by Dec 3rd.
• Standard shipping is just $3.80 for any order.
• Sadly, this great artist passed away. This is his last calligrpahy piece like this.
• Hand-Painted Artwork.
• Handmade Wall Scroll.
• Money-Back Guarantee. 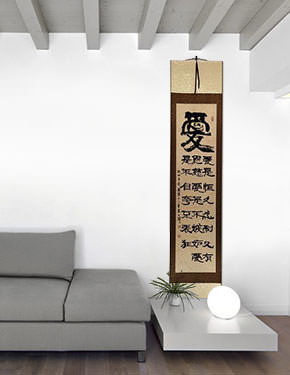 This is a special-edition wall scroll. It's written in the ancient "Lishu" style of writing which dates back to the time just before Christ. Had the New Testament been written in China at that time, this is the script/style that would have been used. It should be noted that the Love character at the top of this scroll is a very stylized ancient form. This wall scroll (like most that we sell) is one-of-a-kind!

This calligraphy was done my Master Calligrapher Xing An-Ping of Beijing. This is a special wall scroll written in the style of script (Lishu) what was widely used in China during the times of Christ (Lishu was the common form of writing until about 220 A.D. in China). We feel it makes this a very special piece for that reason.

If you would like a different Bible verse created for you on custom wall scroll, please post your request here: Bible Verse Requests for Custom Chinese Calligraphy Wall Scrolls If you just want a very short Bible verse in Chinese, the cost is $49.88 for a custom scroll. But if it's as long as this one from 1st Corinthians, the cost is $69.88 ($40 more if you want it done by Master Calligrapher Xing An-Ping).