Enter your email below, and get an automatic notice when results for Sheep are added or updated...

Personalize your custom “Sheep” project by clicking the button next to your favorite “Sheep” title below...

羊 is the character for goat or sheep in Chinese, old Korean, and Japanese.

Are sophisticated and considerate
Can always find the best solution to problems.
Are tolerant.
Are not afraid of hardship.
Know how to save money (thrifty). 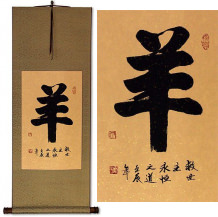 
Check dictionary for sheep
Warning: mysqli_num_rows() expects parameter 1 to be mysqli_result, bool given in /home/admin/web/orientaloutpost.com/public_html/includes/extradict.php on line 49

96 people have searched for Sheep in Chinese or Japanese in the past year.
Sheep was last searched for by someone else on Mar 8th, 2018